Image source, Getty ImagesImage caption, A man casts his ballot on Sunday in Havana Cuba has voted to legalise same-sex 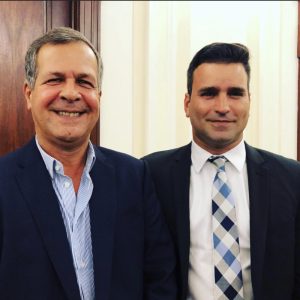 The Dávalos Family: The Devil’s Advocates?

HAVANA, Cuba. – Caribbean Ventures Management LLC is a company founded by Rodolfo Dávalos León and incorporated in the state of Delaware in 2016. It is headquartered in Coral Gables, Miami, according to the company’s public reports.
It is a small business that, as suggested by the word “venture”, implies a risk, an adventure, dating to the period between 2014 and 2017 when a few people became enthusiastic about the prospects that Cuban socialism had, at long last, conquered the hearts of some on Capitol Hill and even in the White House.
It has been said that Rodolfo Dávalos founded the company as a favor to a group of young Cubans, some of them graduates of the University of Computer Sciences (UCI, by its Spanish acronym) in Havana, who were among the few entrepreneurs invited to the U.S. Congress between 2016 and 2017. Judging from press photos published about said meetings, which were promoted by the Obama Administration, no peanut street vendor, or 1950’s-antique-car driver, or bicycle-taxi operator –possibly the most genuine representatives of individual entrepreneurship in the heart of Cuba- came to those meetings.
Caribbean Ventures does not promote itself as a large company, but, if we keep in mind that its main objective is the search and management of gastronomic services in Cuba, then we can see the relative success achieved by its main product: a mobile phone APP that today boasts of about 50,000 clients worldwide.
It is noteworthy that AlaMesa is a Cuban application and platform developed in Cuba with Android and iOS versions. It has been highly praised in Granma, the official daily, which has dedicated long promotional reports to it (much to the surprise and anger of its most orthodox readers who are not accustomed to this choice of topic in the official outlet of the Cuban Communist Party). It has also been praised by The New York Times and Forbes Magazine, a feat that would not have been possible were it not for the endorsement of this Cuban young man who resides in Miami, Rodolfo Dávalos León, and has been “godfather” to several independent projects generated from inside the island.
Nothing out of the ordinary should be perceived in the generosity or empathy of this Cuban resident of the United States toward his peers inside Cuba, especially because, on his social media profiles -which were public until recently but are today either private, inactive, or have vanished- he reveals how much he loves the American way of life.
What does this charismatic, 32-year-old young man really do that is different, notable and even rare if compared to any other Cuban American? Perhaps the answer is in his family name.

Dávalos, a brand more than a surname
If, in exercising his or her rights as legitimate owner of confiscated property, someone today filed a claim against a foreign corporation doing business in Cuba because that corporation is profiting from said confiscated property, he or she will come up repeatedly with a specific surname in all the paperwork that the lawsuit generates for as long as it lasts.
As such, the Dávalos surname will come up in texts on commercial law and legal counseling as well as on the letterhead of hundreds of memos and documents produced in the course of the complex proceedings at arbitration courts.
Keep in mind that the surname which comes up the most is that of Rodolfo Dávalos Fernández, who presides over the Cuban side that handles these matters for the Cuban Chamber of Commerce, and has even practiced before the Court of Arbitration in Paris. His daughter, Lourdes Dávalos León, is in charge of the Cuba archive at one of the principal law offices in Madrid, offering legal advice to businessmen, be they European or not, looking to invest in the Caribbean island.
Rodolfo Dávalos Fernández (Credit: Screenshot)
As we have seen, there are other Dávalos playing the same field, whose principal operations are headquartered in Europe, Cuba and the United States.
This coincidence could lead some to ask themselves if young Rodolfo Dávalos León, Lourdes’ brother, could have served as intermediary between the Cuban government and groups of businessmen and politicians who favor an understanding and an exchange between the government in Havana and the U.S. government.  We don’t know. However, it is curious that he was very active a couple of years back as an investment analyst, or as intermediary, during the time Barak Obama started the thaw of relations with Havana.
Even his career, at least in the United States, began to excel a few years before, although focused primarily on what was to happen that December 17, 2014, as if he had presaged or calculated it.
Dávalos, that surname turned obligatory reference brand for politicians and foreign investors interested in Cuba, also is familiar, although not too much so, to law students at the University of Havana during the last four decades. It is also known to anyone who remembers every international litigation that involved the Cuban government as defendant, plaintiff, summoned party, or even referenced entity, in matters unpleasant in nature, since they always have to do with breech of contracts, frozen bank accounts, confiscations, accumulated debts, fraudulent practices against businessmen, blackmail, espionage and psychological manipulation, as was the case of Elián González.
Rodolfo Dávalos Fernández served as counsel in the first major foreign investment operation that took place in Cuba at the end of the 1980s. It involved the construction of over 1,400 guest rooms in 4 and 5 star hotels in Varadero, plus 200 bungalows, golf courses and a residual water-treatment system by the Spanish corporate group Meliá.
Later, Dávalos Fernández would become assistant director of Meliá-Cuba, as well as personal attorney to Spanish businessman Enrique Martinón, and helped set up off-shore companies in Panama and in Europe. Not surprising, then, that his name, associated with the Mossack Fonseca law firm, was among the first to surface when the Panama Papers scandal broke.
Panama’s legal registry of off-shore company, listing Martinón and Dávalos as Treasurer and Secretary, respectively (Credit: Screenshot)
His name appears, also, in several commercial registries in Panama, as director and secretary of Oceanic Estates S.A. and Arsia International S.A., the latter registered in 1987 (Folio number 186543 by resident agent Morgan & Morgan) and linked to Italian Mauro Casagrandi, who served as ambassador of the Order of Malta in the 1980s and is said to have worked as a double agent of Cuba’s secret service (“Mauro Casagrandi Double Agent for Cuba, page 170”) until he broke with the regime in the early 1990s.
In the course of this practically-uninterrupted time line, up until today, Dávalos Fernández has led the legal teams in several cases: in the case of the five Cuban intelligence agents –the Wasp Network- found guilty of espionage in the U.S.; in the dispute against Chilean businessman Max Marambio (El Mercurio, Chile, July 26, 2013) and his company Río Zaza; as well as in the famous case of Elián González. In an interview on Cubasí, dated March 26, 2013, Dávalos Fernández stated that: “The ‘Five’, Elián, the blockade, they are all revolutionary causes to which I have dedicated a considerable part of my life; they are causes of the Fatherland.”
(Part I of an investigative report conducted by journalist Ulises Fernández. To read the entire report, please press here)
Read in spanish here.
Recibe la información de CubaNet en tu celular a través de WhatsApp. Envíanos un mensaje con la palabra “CUBA” al teléfono +1 (786) 316-2072, también puedes suscribirte a nuestro boletín electrónico dando click aquí.