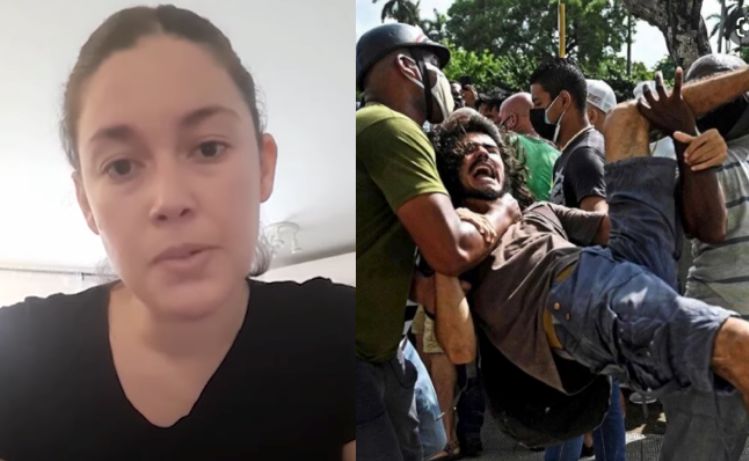 MIAMI, United States. – A few days ago, Giselle Borges, a Cuban woman who resides in the city of Quebec, Canada, posted a video on her Facebook page explaining to the people of Quebec, in French, the events occurring in Cuba since last Sunday, July 11th when thousands of Cubans throughout the island took to the streets to demand freedom and an end to the dictatorship.
Borges, who has lived in Quebec for the last 10 years, tried to explain to her followers why the island is ruled by a dictatorship, and asked them to spread the news of what’s happening in Cuba, in the shadow of international opinion.
“I will not speak of tourism or vacations or trips, but instead, I will speak of the reality that Cubans are living right now. Many of you know my people, many of you have travelled several times to Cuba and have had the opportunity of talking to us, of knowing how we think, and to know what we must endure daily in our country.”
However, she added, “starting this past Sunday, July 11th, the Cuban people said, ‘Enough with this poverty, with the lack of food and medicine, enough!’ Enough without freedom of expression, enough with the dictatorship, we can’t bear it anymore, and we don’t want this dictatorship to linger in our country!”
In the five-minute video, Borges explained that very often, people think that Cuba’s situation is a result of “the (U.S.) embargo, but as a Cuban citizen who lived during 21 years in Cuba, I can assure you that it is not true.”
“Yes, the embargo affects Cuba, but mostly it affects the Cuban government and not the people. Everything about the embargo is clear, everything is written clearly, Cuba must free its political prisoners, Cuba has to hold free democratic elections to have the embargo lifted. However, the Cuban government has no intention of doing that, because all it really wants is to remain in power,” she added.
The young woman condemned the fact that for the last 62 years, the same government has ruled the island, adding that “they are only interested in remaining in power. Repression keeps rising, hunger keeps rising, public health problems keep rising, and the government does nothing, all the while repeating that we have no resources because of the embargo. However, since Sunday, July 11th, the Cuban people are out on the streets demanding their freedom, and all of a sudden, there are resources.”
Giselle Borges also condemned the street violence against unarmed people: “We see cars everywhere, we see trucks full of soldiers everywhere, individuals who evidently are armed, out to fight against people who have no weapons. If you’ve already visited Cuba, you know that there are no weapons on the street, there are no firearms because the government has total control by virtue of having all the country’s weapons, and now, it has released those weapons against the people with the authorization of president-dictator Miguel Díaz-Canel, to kill them. That is what’s happening on our streets today.”
Borges stated that the purpose of the video “is not to make you feel bad or cause you additional stress. It’s really about asking you to support us, to ask you to inform yourselves as much as possible, and most of all, to ask you to share news about what is happening in Cuba, to help make our voices heard through the outside voices –our voices- which we can raise, to post on social media, which is something that Cubans fighting for their lives in the island cannot do because the government cuts access to the Internet every two seconds, leaving them with no access, it’s very difficult, and they are dying in the shadow of international opinion.”
Borges had requested in a prior video posted on social media, that all Cubans who speak a second language should use it as a way of making themselves heard and telling about what the Cuban people are living through. She stated that Cubans are not seeing enough international support, and added: “What’s happening inside Cuba is a massacre.”
In conclusion, she implored: “I repeat, president-dictator Miguel Díaz-Canel has authorized the army to take the streets and to kill Cubans, and that is what is happening. In Cuba, military service is compulsory for young men over 18 years of age, and at this moment, the government is breaking into the homes of those young men and forcing them to confront their own people. They are forced to serve in the Army Reserve, and anyone who refuses to do so is accused of treason, which means “death” in a dictatorship. Therefore, they are compelled to die if they refuse or if they don’t want to kill their fellow Cubans, their brothers, their sisters, their parents.  I beg you to please share and spread this information. Please, help us!”
Read in spanish here.
Recibe la información de CubaNet en tu celular a través de WhatsApp. Envíanos un mensaje con la palabra “CUBA” al teléfono +1 (786) 316-2072, también puedes suscribirte a nuestro boletín electrónico dando click aquí.