MIAMI, United States. – The airline Viva Aerobus announced this Wednesday that it will fly to Havana starting this July 15th. The Mexican airline becomes the first one to operate international flights out of Felipe Ángeles International Airport (AIFA) which was inaugurated in March of this year.
Viva Aerobus was already flying to Havana and to other domestic destinations (Acapulco, Cancun, Oaxaca and Puerto Vallarta) from Mexico City International Airport (AICM).
“Now we give you more options for flying to your favorite destinations! In addition to our itineraries out of AICM, learn about our new itineraries out of Felipe Ángeles International Airport,” the company tweeted this Wednesday.
The airline’s executive director, Juan Carlos Zuazua, said to the press that “with these new routes, added to those already in operation to Guadalajara and Monterrey out of the Felipe Ángeles, Viva Aerobus already has seven destinations to and from this airport.”
“In this way –he added- the airline offers, as of today, the widest choice at this airport,” he stated.
(Captura de pantalla)
The growth of Viva Aerobus
The Mexican airline official stated that “the choice increase by Viva Aerobus out of AIFA is the result of the rising needs to connect through the airways the Mexico Valley Metropolitan Zone, in order to offer passengers a real, low-cost alternative.”
“We see an attractive market opportunity to connect Mexico’s capital with national and international referents for tourist and beach destinations. These new routes offer flying options, at even lower prices, so that more people can be transported between various places in a safe and reliable manner on board Mexico’s most modern aircrafts,” he stated.
AIFA, which was inaugurated last March 21st after three years under construction, has been criticized for operating only six daily domestic flights and one weekly international flight to Venezuela, as reported by the news agency EFE.
In addition, since its construction was proposed, its existence has been questioned by safety specialists, due to the risks of sharing air space with AICM.
Recibe la información de CubaNet en tu celular a través de WhatsApp. Envíanos un mensaje con la palabra “CUBA” al teléfono +1 (786) 316-2072, también puedes suscribirte a nuestro boletín electrónico dando click aquí. 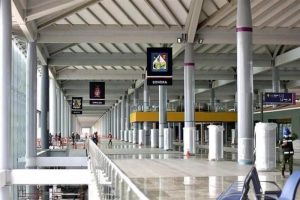 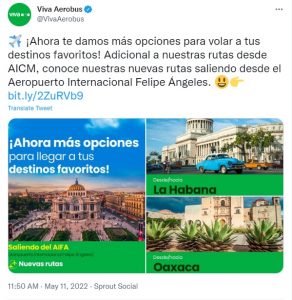 MIAMI, United States. – Mexican airline Viva Aerobús cancelled its flights to Managua from Havana and Santa Clara, stated the Travel Portal agency, which specializes in the sale of national and international airline tickets to and from Cancun.
In a brief note published on social networks last April 6th, Travel Portal had announced that suspension of Viva Aerobús operations to the Nicaraguan capital would start on April 9th. However, it was not until April 8th that the agency offered details about the suspension.
“Unfortunately, starting Saturday, April 9th, we will no longer operate flights to Managua from any route that we flew at the present time,” stated the agency on its Facebook account.
(Screenshot/Facebook)
Viva Aerobús operated regular flights to Managua from Havana and Santa Clara, with stops in Cancun in both itineraries.
Travel Portal informed passengers holding paid tickets that they would be refunded in full for the cost of the ticket.
“Passengers holding paid tickets for travel starting April 10th will be refunded in full. However, travelers holding confirmed tickets for prior dates for which they did not travel on that original date, for whatever reasons, will not receive reimbursement for said tickets.”
The agency advised its clients that “due to the high volume of passengers,” reimbursements could take as long as 21 days. However, it gave no explanations about the decision of Viva Aerobús to cancel flights between Cuba and Nicaragua.
Vagamundos, a Mexican travel and service agency aimed at a Cuban clientele, also confirmed the cancelation of flights.
“We would like you to know that this decision has nothing to do with the agency and, unfortunately, it affects all of us. For the moment, we have no additional information about this matter. We ask for your understanding,” stated the agency to its clients.
(Screenshot/Facebook)
After the news was released, Cubanet tried, through different channels, to communicate with Viva Aerobús representatives to learn details about the cancellation of flights. However, it was impossible to establish contact with airline personnel.
On social media, the reaction by Cubans who lost their flights soon made itself known.
“My God! What is this? I was scheduled to fly on the 16th, and they do this without any explanation. What lack of respect. You don’t do that to anyone,” commented Yoandy Albolaez, a young man in Havana, on Facebook.
“It’s a total lack of respect. How can they do this with such little notice. One loses in many respects: in hotel reservations, and many other things, and that money, who is going to reimburse us that money? A lack of respect on the part of this company! They are not serious, truly (…) with no explanations given, only that they will no longer operate and that the money will be reimbursed. And how about the other money that has been lost?” asked Dami Sánchez, a Matanzas resident.
Travel Portal made it perfectly clear that the agency had no responsibility for the flight cancellations.
“We apologize truly for the inconveniences, we understand how frustrating it can be, but, believe us, this is something that is totally out of our reach,” was the agency’s answer to the comments made by several Cubans in flight of their flight cancellations.
Viva Aerobús joined Copa Airlines on the list of companies that cancelled their flights between Cuba and Nicaragua. In February, the Panamanian airline assured CubaNet that it would cease to operate that route, but that it would keep its commitment to passengers who had already purchased their tickets.
“The restriction has been presented by the governments of Central America that do not welcome the arrival of flights coming from Cuba,” explained a Copa Airlines rep to CubaNet.
In spite of flight cancellations by these two airlines, flights between the two countries will continue, at least during the month of April, on Conviasa and Aruba Airlines, according to the Cuban Airports and Airport Services Company’s schedule.
Recibe la información de CubaNet en tu celular a través de WhatsApp. Envíanos un mensaje con la palabra “CUBA” al teléfono +1 (786) 316-2072, también puedes suscribirte a nuestro boletín electrónico dando click aquí. 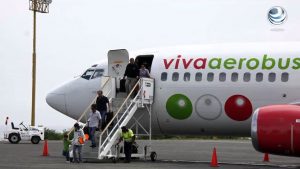