EFE/14ymedio, Havana, 12 October 2021 — A group of relatives of people detained and accused by the Cuban authorities after participating in the anti-government protests on July 11 on the island have asked the Conference of Catholic Bishops of Cuba (COCC) to intercede for their release.

“We are addressing the ecclesiastical authorities to ask for their immediate and formal intervention in order to achieve the liberation of all Cubans who exercised the fundamental right to freedom of expression and peaceful demonstration,” says the text of the letter, released by the opposition forum Estado de Sats on... 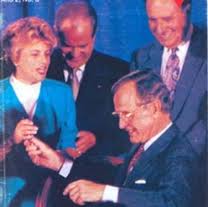 Of the spurious and savage: the Torricelli Act

The Torricelli Act, also known as the Cuban Democracy Act, was passed by the U.S. Congress on October 23, 1992, during an escalation of the economic and financial blockade imposed on Cuba at a time when the U.S. far right and the Miami-based anti-Cuban mafia believed that the Revolution had hours to live.Big mistake, as we all know. Although the collapse of the Soviet Union and the socialist bloc dealt a harsh blow to its economy and social life, Cuba devoted itself to finding other markets and maritime communication routes, under enormous pressures and not without many sacrifices, but hell-bent on preserving socialism and sovereignty no matter what.They thought it was their moment, and so the fatuity and the money of the Cuban American National Foundation, a traditional promoter of hatred and terrorism, reached Democratic Senator Robert Torricelli, creator of a legal monstrosity as illegal as the blockade, kept in place since February 1962.It came out under the presidency of George Bush (Sr.), in the midst of an electoral campaign that led him to aim for the Florida vote, although Bill Clinton and Florida governor Bob Graham also played a role.The turn of the screw consisted this time in banning subsidiaries of U.S. companies in third countries from doing business with the island and denying entry to U.S. ports to any vessel on the planet that had touched a Cuban port in the previous 180 days.Those who violated or failed to comply with these provisions would be subject to severe sanctions provided for by the Law, designed to discourage those willing to help Cuba at such a crucial moment in its history while its people suffered great hardship. Nothing but blackmail and opportunistic threats.A very particular feature of this Law, finally labeled Cuban Democracy Act, was that it laid down provisions deemed outrageous by international law and the UN Charter, since they took no heed of, and trampled on, the sovereignty of other nations and the interests of citizens and companies around the world. It was all about the end justifying the means.Moreover, their initial arguments were so brutal and expeditious, and their euphoria so insane, that they were forced to change their approach. In the end, they threw in their famous Made-in-USA democratic discourse and highlighted its “humanitarian purposes”, which entailed liberating Cuba from a communist dictatorship. However, they did not change a single one of the ruthless measures.The objective of totally isolating Cuba from the international market and destroy its economy was obvious to any keen observer, so they went to great lengths to construct the impossible: a legal framework for their flagrant violation of the international standards on freedom of trade and navigation. Only the enormous ego and disrespect of an imperial mind can create such a monstrosity.For Cubans, it is inadmissible from a moral and legal point of view, but also because in the lies and manipulations of its text, which vainly invokes human rights, is the threat of a U.S. military intervention, if deems necessary.The Torricelli Act was part of the U.S. blockade. It had its antecedents in the Mack Amendment, named after Connie Mack, a Republican senator from Florida, notoriously reactionary and anti-Cuban and, therefore, a strategic ally of the Cuban American National Foundation.That Amendment, dating back to 1990, totally prohibited companies from third countries, subsidiaries of U.S. parent companies, from engaging in any type of economic-commercial operations with Havana.There was also the Smith Amendment, named after its creator, Representative Lawrence Smith, also from Florida and very close to the Cuban American National Foundation. With the same budget as the Mack Amendment, it added the stipulation of the seizure and impoundment of ships arriving at Cuban ports.In 1996 the Helms-Burton Act increased, with international overtones, the viciousness of the blockade of Cuba by stipulating the federal budget laws and the Trade Sanctions Reform and Export Enhancement Act of 2000.Other prohibitions included the denial of funds for the sales of agricultural products to Cuba and the Cuba travel ban.And we come to the present times, when President Joe Biden, reneging on his campaign promises, has not repealed a single one of the coercive and pressure measures taken by his predecessor, Donald Trump: another 243 measures, to the already super bulging record of abuses against the nation that does not cease in its sovereign exercise.Among these are the suppression of cruise ship travel and flights by U.S. airlines to any airport other than Havana’s; the suspension of consular services in Cuba and their relocation in third countries, and obstacles to banking transactions.The greatest insult and aggravation came with the inclusion of Cuba in an arbitrary and unilateral list of states that, according to Washington, sponsor international terrorism, which entails a significant negative influence on the island’s international financial relations.The imperial blockade with its spurious and savage moves remains untouched, like a dinosaur, doomed to disappear with the planet’s repulsion for this kind of monster.Twenty-nine years after the Torricelli Act, Cuba is certainly still living in democracy, but a socialist democracy, one that tries to improve and enrich the republic “with all and for the good of all” that José Martí dreamed of. The Cubans themselves want more, but it will be up to them to decide.